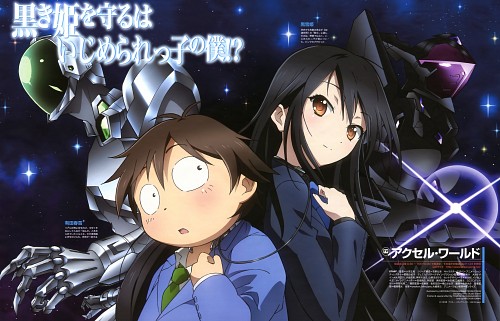 Plot:
In the year 2046, Neuro-synchronization, a technology system that allows humans to manipulate their five senses, has become widespread to the point where people can access the internet and enter virtual worlds through a device known as a Neuro-Linker.
Haruyuki "Haru" Arita is a short, fat boy who has low-self esteem due to constant bullying. To escape the torment of real life, he logs in to the school's virtual world network where he plays squash alone and always gets the highest score.
One day, Haru attracts the attention of the Student Council Vice-President "Kuroyukihime" who offers him Brain Burst, a secret program which allows a person to make time appear to stand still in their surroundings by "accelerating" their brainwaves in the real world. Unfortunately, there is a limit to how many times a person can accelerate since each acceleration costs Burst Points, and the primary way to get more points is to fight and defeat other Brain Burst users in the program's virtual reality massive multiplayer online (VRMMO) fighting game. However, if a user loses all of his/her points, the Brain Burst program will uninstall itself and block all re-installation attempts, thus permanently removing the user's ability to accelerate. In addition, a Brain Burst user may only distribute a single copy of the game. Due to the nature of Brain Burst, the installation may fail if certain conditions are not met. In order to successfully install and use Brain Burst, a prospective user must have a Neuro-Linker installed at birth and must be able to handle heightened brain activity. The one-distribution-per-user rule applies even if an installation fails. Users of Brain Burst are known as "Burst Linkers."
Kuroyukihime wants Haru's help as she wishes to reach the highest achievable level, which is level 10, and meet the creator of Brain Burst in order to learn its true purpose, but in order to do that, she must defeat five other level 9 users who are known as "The Six Kings of Pure Color," the leaders of the six most powerful factions in the Brain Burst world. Haru agrees to help Kuroyukihime to repay her as well as overcome his weaknesses. Plot:
In the year 2022, the Virtual reality Massive Multiplayer Online Role-Playing Game (VRMMORPG) Sword Art Online (SAO) is released. With the Nerve Gear, a VR Helmet that stimulates the user's five senses via their brain, players can experience and control their in-game characters with their minds. But an unexpected event occurs on November 6, 2022 when Akihiko Kayaba, the creator of SAO, prevents the players from logging out. Akihiko issues them a challenge; if they wish to be free and log out of the game, they must reach the 100th floor of the game's tower and defeat the final boss. However, if their avatars die in the game, so will their bodies in the real world. As the game's 10,000 players try to accept their new deadly predicament, Kirito, a skilled player who tested the beta version of the game, is determined to reach the 100th floor and attain freedom. As he befriends other players along the way, including Asuna, who becomes his partner and love interest, Kirito faces many obstacles and eventually discover the true purpose of SAO.


Ik dacht ik post het wel even aangezien er wat anime fans hier rondhangen..
He who knows others is wise. He who knows himself is enlightened. ~ Lao Tzu
The richest man is not he who has the most, but he who needs the least. ~ Onbekend
Omhoog